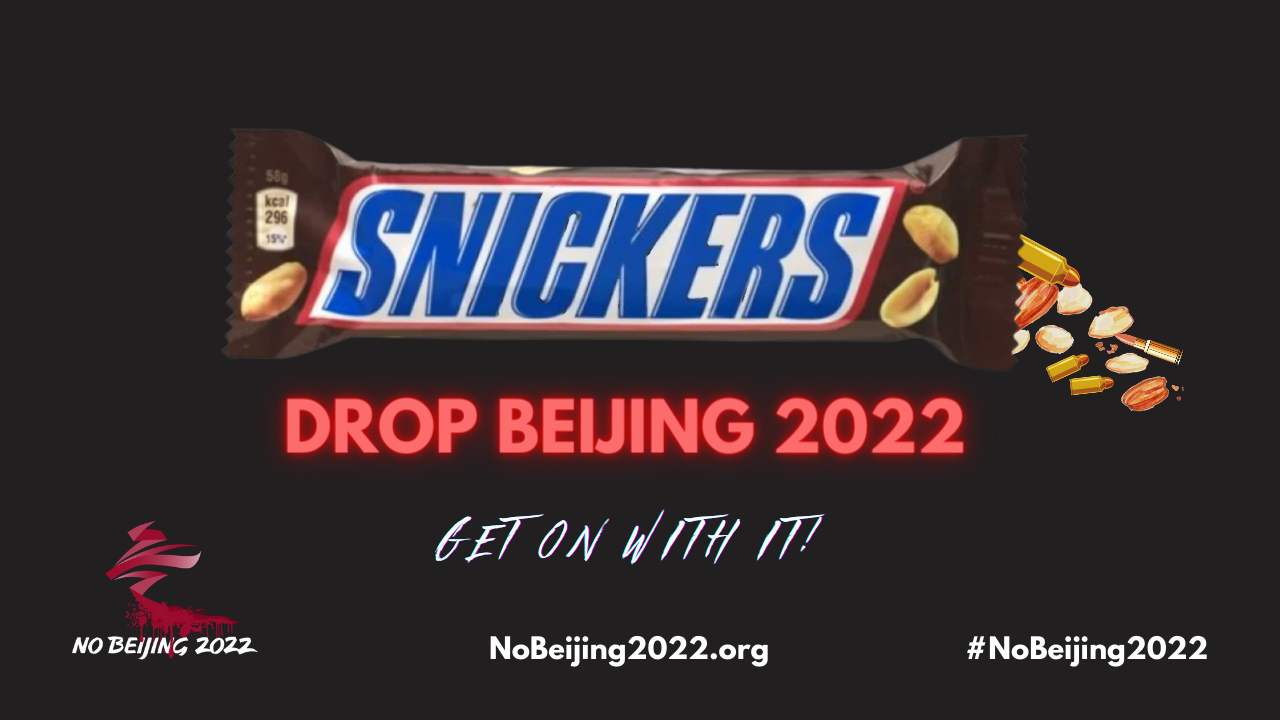 In an open letter to Snickers owners, Mars Wrigley, a coalition of over 200 global campaign groups, have urged the company to immediately cancel its sponsorship of the Beijing 2022 Olympic Games or risk being tainted by association. The open letter comes after Snickers bosses failed to respond to a private letter in January following news the company is one two non-Chinese sponsors of the Beijing Games, alongside European brand EF Education First.

The letter urges Mars Wrigley’s CEO Grant Reid to uphold the company’s strong human rights policies and practices, and the public commitment to “building strong human rights partnerships”; all of which are in serious jeopardy due to its partnership with Beijing 2022 which is being hosted by the Chinese government – one of the world’s worst human rights violators.
The Chinese government sees the 2022 Winter Olympics as an opportunity to improve its image, investing millions of dollars in a public relations campaign to encourage foreign states and businesses to invest in the country – including those which have publicly committed to respecting human rights, in an effort to boost their own credibility by association.

The Coalition highlights that in reality the Beijing 2022 Winter Olympic Games are set to open against a backdrop of “severe repression and worsening human rights” raising concern that Snickers will be legitimising China’s attempt to use the Olympic Games to ‘sport wash’ a draconian crackdown against freedom and democracy. The letter outlines that the situation in occupied Tibet is so serious that it is now listed as the worst place in the world for civil and political rights, alongside Syria; at least two million Muslims – including Uyghurs, Kazakhs and Uzbeks – are locked in “re-education camps” undergoing systematic torture, rape and political re-education; and in Hong Kong, Beijing has implemented a draconian National Security Bill in a final effort to curtail any remaining human rights of those living under Chinese rule.

Speaking about the lack of response to their previous letter, the group said that it “…only further heightens our fears that your company may knowingly compromise on its public commitments to human rights, in exchange for access to the Chinese market.” The group went on to say that “These concerns are particularly troubling given that Snickers already served as the official sponsor for the 2008 Beijing Summer Games, when China led a brutal human rights crackdown in the lead up to – and during – the Games which was broadcast for the world to see.”

Mandie McKeown at International Tibet Network: “Snickers is benefiting from a situation in which millions of Tibetans face systematic human rights violations on a daily basis. The company needs to do right by its own human rights commitments, and stop profiting off a regime that is using the Olympic Games to bolster its international reputation and whitewash its brutal crackdown. No company should normalise human rights violations of this scale and until Mars Wrigley ends its business relationship with the Chinese authorities, it’s reputation and commitments will be deeply compromised.”

Pema Doma from Students for a Free Tibet: “This partnership between Mars Wrigley’s and the Beijing 2022 Olympic Games comes at a time when China’s assault on freedoms is spiralling out of control and millions of Tibetans living under Chinese occupation suffer the daily consequences of Beijing’s tight grip. Mars Wrigley is now faced with a basic choice: it can either do the right thing and terminate its partnership with a government spearheading one of the world’s worst human rights crackdowns in history or pursue a policy of ‘business as usual’ that will only make the situation worse.”

Zumretay Arkin from World Uyghur Congress said: “Mars Wrigley has a clear opportunity to make the right decision to uphold their commitment to human rights and use their influence to set a precedent to other companies seeking to profit off a horrifying human rights environment in the context of the Beijing 2022 Winter Games. Instead, they have chosen to bury their heads in the sand – ignoring blatant evidence that they are helping the Chinese government mask violations that cause immense suffering to Tibetans, Uyghurs, Hongkongers and others living under China’s repressive rule.”

John Jones from Free Tibet said: “Mars Wrigley’s decision to continue its partnership with Beijing for the 2022 Winter Games is a reprehensible and cowardly move that will be another devastating blow for the human rights of those living under Chinese Communist Party rule. As Beijing enters a deadly new stage in its crackdown against Tibetans, Uyghurs, Southern Mongolians and others, companies should be focused on showing their commitments to their own human rights standards, rather than lining their pockets with deals struck with an abusive government.”

In the letter, the Coalition said: “By terminating this agreement, Mars Incorporated have an opportunity to send a clear message that it will not tolerate dealing with governments that profit from occupation, genocide and human rights violations and to make a real difference to the lives of those living under Beijing’s tight grip.”