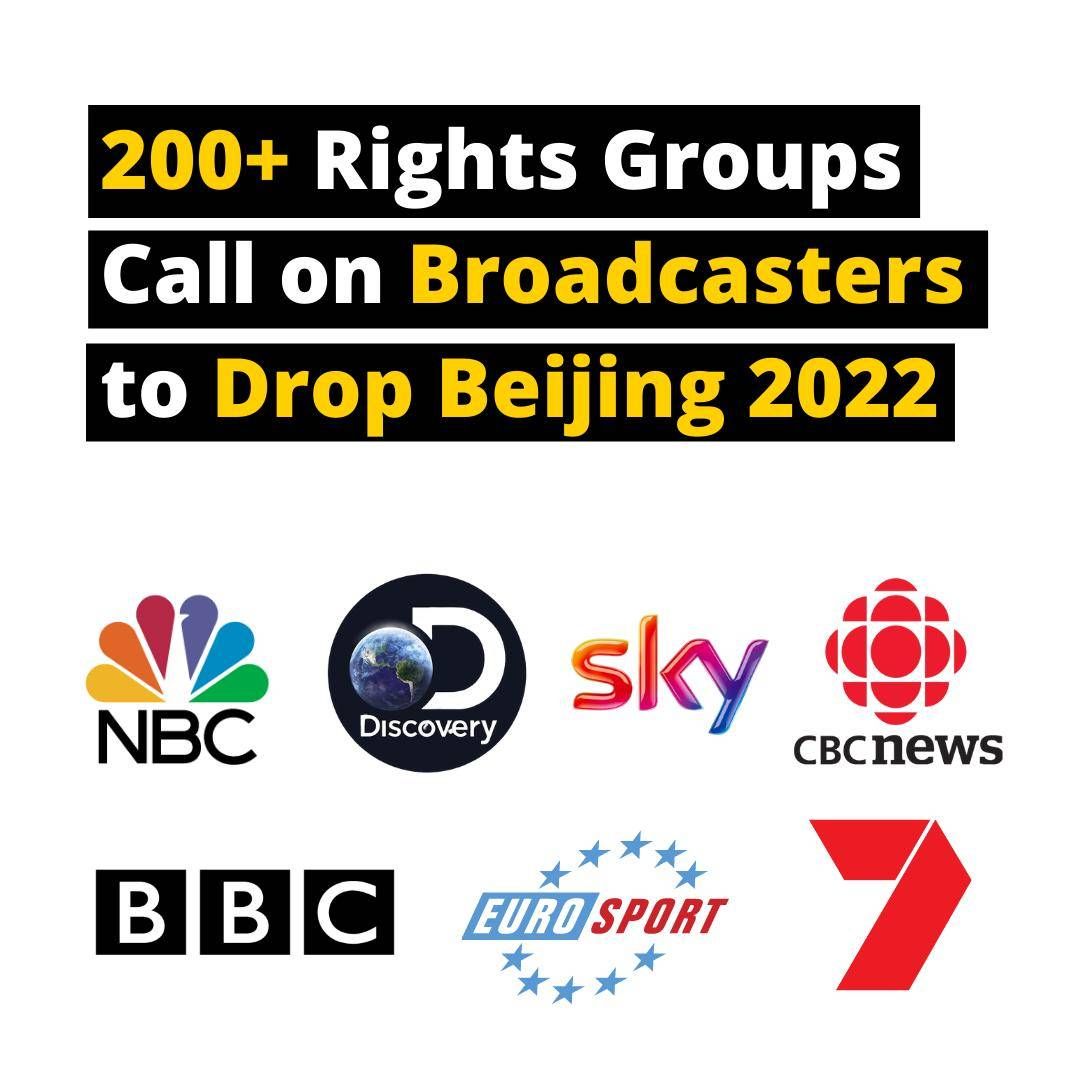 NBC, BBC, CBC, Sky, Discovery, and Eurosport among over 20 Broadcasters targeted by more than 200 Campaign Groups

Today in a public letter [1],  a coalition of over 200 Tibetan, Uyghur, Southern Mongolian, Hong Kong, Taiwanese, Chinese Democracy and human rights campaign groups called on 26 Olympic broadcasters – including NBC, BBC, CBC, Sky, and Discovery – to “immediately cancel your broadcasting deals” to screen the Beijing 2022 Winter Olympics or face a serious risk of being complicit in China’s plan to ‘sport wash’ [2] their severe and worsening human rights abuses.

The joint letter outlines the stark hypocrisy of the media companies’ human rights policies that claim to promote and protect individuals. [3] The reality is that Tibetans, Uyghurs, Hongkongers, Southern Mongolians, and Chinese people live under some of the worst oppression the world has ever seen. Daily life for those living under China’s rule is characterized by a merciless crackdown on individual and collective rights and freedom, an all-out assault on cultural diversity, and a tearing apart of community cohesion through sophisticated methods of surveillance and control. [4]

The campaigners say that the media companies, some of which are national broadcasters paid for by the public, will give legitimacy to the Chinese government’s exceptionally repressive policies targeting Tibetans, Uyghurs, Southern Mongolians, Hong Kongers, as well as Chinese dissidents and faith communities and will further embolden the authorities to continue carrying out genocide against the Uyghur people.

Support for a boycott of Beijing 2022 has grown exponentially since activists released a joint letter to governments in September 2020. Parliaments [5] and elected representatives [9] from across the political divide agree that supporting the Beijing 2022 Olympics is tantamount to endorsing China’s human rights abuses.

Campaign groups and human rights experts believe that the awarding of the 2022 Winter Games to Beijing showed that lessons had not been learned from 2008 after Beijing failed to live up to basic rights commitments it made ahead of the Summer Games.  Instead, and as predicted, China quickly abandoned these promises, cracked down heavily on peaceful Tibetan protests, and has since heightened its repression, with governments increasingly recognising its policies against the Uyghur people as a genocide.

Lhadon Tethong, Director of Tibet Action Institute said: “It is unconscionable that NBC, CBC and other broadcasters plan to help Chinese leaders project a rosy image of an Olympic “Games as Usual” while they are carrying out genocide against the Uyghurs, and engaging in a massive campaign of repression against Tibetans and so many others. We are seeing unprecedented global agreement, at every level, that the Beijing 2022 Games cannot go ahead as usual and that they must be cancelled, moved, or boycotted.”

Dolkun Isa, President World Uyghur Congress, “With less than 5 months to the Beijing Olympics, the world must come together to condemn the ongoing Uyghur genocide and severe human rights violations in Tibet, Hong Kong, Southern Mongolia, and China. This includes the IOC, sponsors, broadcasters, national Olympic committees. Broadcasters have a moral responsibility and must not promote the Chinese government’s propaganda campaign. We demand that they drop their agreements, and accurately portray the human rights violations instead. The international community should not set a precedent.”

Frances Hui, Director of We The Hongkongers, said: “Boycotting the Beijing 2022 Olympics should not be subjected as a journalism ethic problem if genocide is happening right in China, an autocracy that actively commits human rights crimes against ethnic groups and dissidents. By broadcasting the game, the media is emboldening China on its atrocities against humanity and overshadowing the situation in Tibet, Southern Mongolia, Hong Kong, Taiwan, and China proper. The media should take a strong stance and terminate their Olympic deals with China.”

Rushan Abbas, Executive Director of Campaign For Uyghurs, said: “My own sister, Gulshan Abbas, a retired medical doctor, has been detained by the Chinese regime for 3 years now, having committed no crime, in direct retaliation for my activism in the United States. How can media companies overlook international crimes like her abduction by a State actor? How can they ignore the pain of millions of Uyghur families? Choosing to ignore active genocide in favor of this Olympic blood money is truly despicable.”

Zoȅ Bedford, Executive Officer of Australia Tibet Council, said: “The participation of broadcasters in the 2022 Beijing Olympic Games will be seen around the world as an endorsement of the Chinese Government and their brutal human rights abuses. Will these same broadcasters be also covering the atrocities occurring in China just kilometers away from Beijing? The mass detainment of Uyghur people in camps? The arrest, torture, and deaths in custody of Tibetan political prisoners? Or are they determined to focus their cameras only on the spectacle of the Olympic games -to turn a blind eye to these crimes against humanity ?”

John Jones, Campaign, Policy and Research Manager at Free Tibet said: “The 2022 Beijing Winter Games are a human rights disaster in the making. The prestige that the Chinese Communist Party will receive from hosting the world’s best athletes risks undermining years of international efforts to resist its widespread torture, mass imprisonment and genocide. Broadcasters have the power to make a real impact here: do they help the CCP by broadcasting its Winter Games and ignoring its abuses, or do they take a stand and end their broadcast deals? There is no neutral stance here, no way of separating sport and politics. There is only the chance for broadcasters to act with courage and use their power to say no to Beijing 2022.”

NOTES TO EDITORS:
1. Letter can be viewed HERE
2. “Sports washing” is the practice of an individual, group, corporation, or nation-state using sport to improve its reputation, through hosting a sporting event, the purchase or sponsorship of sporting teams, or by participation in the sport itself. At nation-state level, sports washing has been used to direct attention away from a poor human rights record. While at the individual or Corporate level sports washing is used to cover up and direct away attention from said person’s or company’s vices, crimes, or scandals.”
3. Examples include: BBC, CBC, SKY, NBC, Discovery
4. The Beijing 2022 Winter Olympics is set to happen amid one of the world’s worst crackdowns against freedom, democracy, and human rights where: