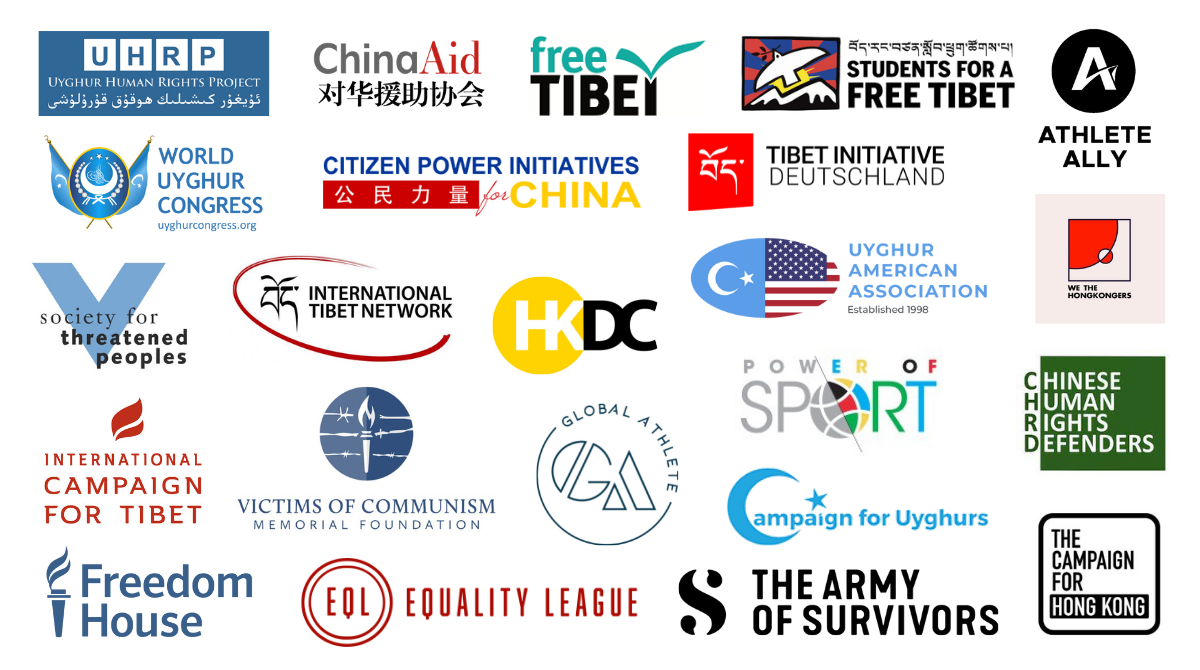 Sponsors, NBC Should Stand with Athletes and Against Repression

(Washington DC, February 2, 2022) – A coalition of athletes and human rights groups is calling on the International Olympic Committee (IOC) and The Olympic Partner (TOP) Olympic sponsors to ensure athletes’ free expression is guaranteed during the Beijing Winter Games. The 2022 Beijing Games officially launch on February 4 against a backdrop of Chinese government atrocity crimes targeting Uyghur Muslims and other Turkic communities, and harsh repression in Tibet, Hong Kong, and on the mainland.

“Sponsors of the Beijing 2022 Winter Games cannot pretend that these Olympics are business as usual,” said Rob Koehler, director of Global Athlete, an athletes’ rights advocacy group. “Corporate sponsors say that their sponsorship is to support the athletes. Meanwhile athletes are heading into a hazardous working environment in China, with few protections for free speech and no rights to protest crimes against humanity as they may want to do. Sponsors have the responsibility to insist on games hosts that uphold—not trample—human rights.”

Recent remarks by a high-ranking Beijing Organizing Committee member are a thinly veiled threat targeting athletes who could speak out about such abuses: “Any behavior or speech that is against the Olympic spirit, especially against the Chinese laws and regulations, are also subject to certain punishment.”

“It’s very troubling that the IOC has been so willing to get in line with the Chinese government’s own approach to silencing critics,” said Uyghur Human Rights Project Executive Director, Omer Kanat.

The IOC has committed to allowing athlete expression during the Olympic Games, including during press conferences and through social and traditional media, but IOC Guidelines state that protest or demonstration must “comply with local legislation.” The IOC has an obligation to uphold free speech rights of Olympic athletes and ensure that none are subject to reprisals for exercising those rights.

“Athletes should not have to be scared for their safety when they go to China,” said Noah Hoffman, two-time Olympian skier and board member of Global Athlete. “It is completely unacceptable that athletes have to censor themselves on human rights and other topics—in order to keep from being censored or sent home by the Chinese government, the Olympic host.”

“Olympics stakeholders must uphold human rights during the Games, which includes athletes’ freedom of speech,” said Zumretay Arkin, Program & Advocacy Manager at the World Uyghur Congress. “Athletes who want to show solidarity with Uyghurs, Tibetans and Hong Kongers should be applauded, not punished.”

“Athletes are already at risk of being used as propaganda during China’s Olympics, and now they risk losing their freedom of speech and protest as well,” said Pema Doma, Campaigns Director for Students for a Free Tibet.

“The IOC’s integrity and indeed its legitimacy as an international organization will be tested by its reaction to such threats,” said Bennett Freeman, member of the Steering Committee of the Coalition to End Uyghur Forced Labor and former U.S. Deputy Assistant Secretary of State for Democracy, Human Rights and Labor.

Gold medal Olympic skier Mikaela Shiffrin has said she should not have to choose between her “morals” and her “job” to compete in China. Basketball player Enes Kanter spoke out about repression of religious and other freedoms in Tibet. Two-time Olympic cross-country skier and former Team USA athlete Noah Hoffman said of his former teammates, “I am scared for their safety when they go to China.”

“The Olympic Partner” sponsors including Coca-Cola, Samsung, and Airbnb regularly profess their support for them. However, to demonstrate meaningful support, sponsors must be prepared to push back on the Beijing organizers’ threats, and back athletes if they are subject to reprisals or intimidation. The failure to support athletes in such circumstances makes the sponsors—along with the IOC—complicit with the Beijing Organizing Committee and the Chinese government in human rights abuses.

Finally, NBC Universal—the exclusive broadcaster of the Beijing Games in the United States—must ensure that any athlete protests related to the human rights situation in China are free from censorship. NBC’s journalistic integrity will be judged by audiences and advertisers watching to ensure that it fully covers the repressive human rights climate in China, and does not participate in promoting propaganda from the Chinese government.

“Freedom of expression is an important human right under international law, but Chinese human rights defenders are routinely put in prison for merely expressing their views. The IOC and governments must be ready to protect athletes who could become victims of the Chinese government’s retaliation,” said William Nee, Research and Advocacy Coordinator at
Chinese Human Rights Defenders.